We have all of the electrical components in stock now. It was more trouble than expected due to the worldwide IC shortage, but we eventually found sources for everything. We also ordered extra so we can have some phones in stock after shipping everything.

As part of the process of buying components, we had to test the chips to make sure they weren't fake or old stock. This video shows how we did that:

If you want to know more about the IC shortage, this is a decent overview:

We've been doing drop testing of the plastic frames recently and eliminated a few weak points found during testing. 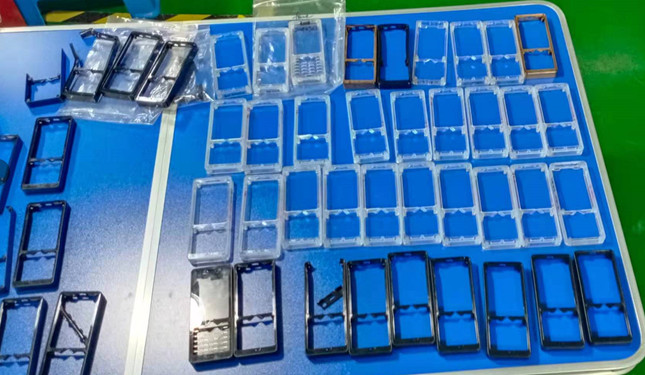 We've had enough components to make all of the rest of the electronics for about 6 weeks. At the same time we made some minor changes to the PCB design and ordered over 1000 from the same supplier we've been using. Then we fully assembled 20 sets and found issues with discoloration and cracking in the silkscreen and soldermask, and in a couple instances the soldermask completely came off. This happened during reflow (when the boards went into a hot oven to melt the solder and attach the components to the board). We think it was because they used non-RoHS soldermask and silkscreen on RoHS boards.

It took about a month to get the PCB supplier to admit it was their problem. We then got some samples from another supplier, again with substandard results. This time the soldermask was wrinkled, misaligned, and couldn't fill the small spaces between pads. The PC thickness was also out of tolerance, which meant the connectors wouldn't line up correctly with the holes in the phone housing.

It's been way too long just getting some PCBs that don't have issues, so we are now about to order a few test panels from 3 different suppliers so we can move forward with the one that gives us the least amount of trouble. It's probably going to need 2 weeks to get those, and another few days to evaluate them. Assuming we have good samples we can then produce the rest.

This process hasn't been a complete waste of time, because it did give us an opportunity to find some smaller issues that would have caused quality problems and eliminate them.